Although introduced in 2005, this scheme seems to be catching the trend off late in India. Understand this group captive  power scheme in depth with pros and cons below.

What is a Group Captive Power Scheme?

A group captive scheme is where someone develops a power plant for collective usage of many commercial consumers. The developer should have at least 26% of the equity and has to consume at least 51% of the power produced. The term "captive power scheme" was introduced in the Electricity Rule, 1995. The picture below describes how a group captive power scheme will work: 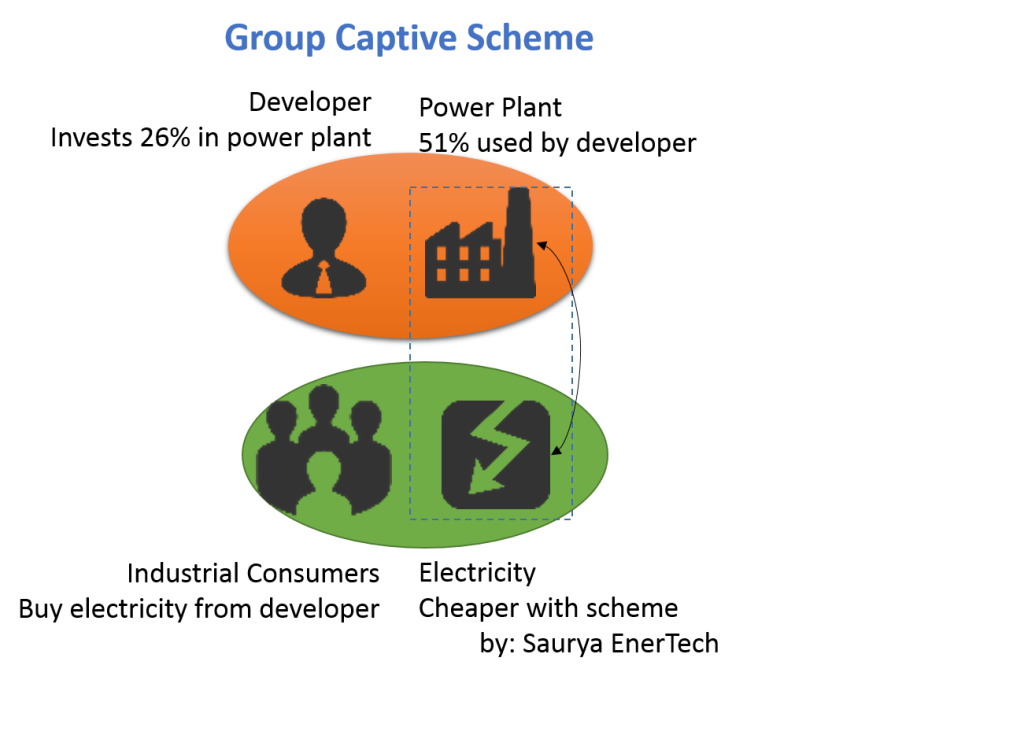 Group captive power scheme can be seen in section 5.5.25 and 5.5.26 of National Electricity Policy which outlines the creation of captive power plants by a group of people. Following is an excerpt from the policy:

A large number of captive and standby generating stations in India have surplus capacity that could be supplied to the grid continuously or during certain time periods. These plants offer a sizeable and potentially competitive capacity that could be harnessed for meeting demand for power. Under the Act, captive generators have access to licensees and would get access to consumers who are allowed open access. Grid inter-connections for captive generators shall be facilitated as per section 30 of the Act. This should be done on priority basis to enable captive generation to become available as distributed generation along the grid. Towards this end, non-conventional energy sources including co-generation could also play a role. Appropriate commercial arrangements would need to be instituted between licensees and the captive generators for harnessing of spare capacity energy from captive power plants.

What are the advantages of Group Captive Scheme?

How will the Group Captive Power Scheme work?

Imagine Company A along with company B and company C decide to bring down their electricity costs. Collectively they make a power plant with 26% equity and decide to use about 51% of energy produced. Then they decide to sell the remaining 49% power to Company X, Y and Z. This makes the whole group part of the group captive power scheme.

Saurya EnerTech is a leading solar energy consultancy service in India and we have worked with multiple solar power plant projects both grid interactive and off grid. Reach out to us for engineering services you might need for your group captive solar power plant.

All our previous workshops have been supported by MNRE