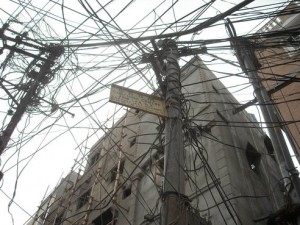 While countries like China, USA, Germany are racing to invest and develop new era of grid technology, India's grid remains severely under developed. Where is India in this smart grid race? More about Smart Grid India:

The energy world is excited about this new so called smart grid. Conferences and organizations seems to be talking more about smart grid innovation than anything else. What really is a smart grid?

So, a smart grid is broadly a new generation of grid technology that will bring innovations and improvements in not only the efficiency end but it will help in other areas such as net metering, smart scaling etc. It is broadly said that a real smart grid is almost a decade away from being realized but we are already seeing the so called smarter grids being put up across Europe and the USA.

A widely used analogy is called the Thomas Edison (inventor of grid) Vs. Alexander Graham Bell (inventor of telephone) analogy. These two inventors are from the same era and brought revolutionary technologies to mankind. If Bell was to come to 21st century, he would not understand how the modern phones with their technology works but if Edison was to make a comeback he would still know how the grid functions.

India has faced with severe power outages recently causing tremendous economical loss. The massive grid failure of North India in 2012 was the largest in history of world affecting 620 million people. A comparatively smaller city like Kanpur had economic loss of 450 crores. India needs a smart grid yet there seems no specific road map to achieve this.

Unlike almost all developing countries with ambitions like India, India has even yet to realize the power of net metering. This has significantly affected the solar residential scenario as the costs are not feasible.

What is going on right now for Smart Grid India

There are a few organizations to work towards a smart grid in India. The Power Ministry has set up a India Smart Grid Task Force  or ISGTF with Mr. Pitroda as it's head. Though they dont seem to have a clear roadmap or agenda in achieving this. On their website it says that they "serve as government focal point for all smart grid related activities".

POWERGRID of India states on their website that they have an expertise for development of smart grid. Yet, there are no significant fundings or research being done.

Disclaimer: This blog does not talk about Saurya EnerTech stand on the subject and is merely the author's point of view on smart grid India.

Advait Kumar is currently pursuing Electrical Engineering from the Pennsylvania State University. Solar and renewable energy are the key focus of his studies and research and he is active in various social organizations and ventures. Apart from Swajal, Kumar also founded MindKART (an online education portal) and Nirbhaya Urja (A non profit social venture for lighting applications). He is also the IT Division head for VSSE Pvt. Ltd.

2 thoughts on “Smart Grid India: Where is India’s future grid?”

All our previous workshops have been supported by MNRE